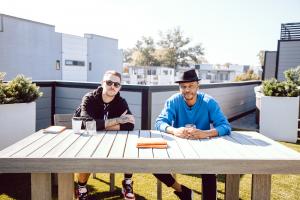 The Canadian-born, Charlotte artist opens up about commonly being “the white dude” among Black friends and his path to using his work for social activism.

[I realized], I have all of these things I gained from being a part of Black culture, but none of the negatives.”
— Kyle Mosher

In his 60-minute talk, available to watch via YouTube, Mosher opens up about being a Caucasian man using his work to draw attention to the plight of Black people.

“I have always been the white dude,” Mosher said, adding that because of how he grew up, he felt more comfortable around Black people.

“[But even as a child], I knew there was a dynamic that was different … a difference in how we’re being treated,” he added.

Mosher is a multidisciplinary artist whose work has been featured in Forbes, The New York Times, The Wall Street Journal, on HBO and elsewhere. He’s participated in several efforts challenging racism and inequality, including the “Off the Plantation” exhibit at Elder Gallery and Charlotte “Black Lives Matter” mural.

In doing so, Mosher said he’s developed relationships with Black artists and creatives, eventually gaining trust to candidly discuss his role as a white man in social activism.

“I started having conversations about privilege and being a ‘culture vulture,’ he explained. “[I realized], I have all of these things I gained from being a part of Black culture, but none of the negatives.”

“We need to be able to create a safe space where there’s trust, where you can have authentic conversation, questioning and answering to benefit both sides,” Dae-Lee told Mosher.

“I believe [time and long-term relationship] is the recipe of continuing to build trust.”

ABOUT DAVID ‘DAE-LEE’ ARRINGTON
David “Dae-Lee” Arrington is a Norfolk, Va., native who now calls Charlotte, N.C., home. Summarizing his journey “from the corner to the cul-de-sac,” Dae-Lee experienced a 180-degree racial, cultural and socioeconomic shift that changed his life and inspired his work today to bridge divides that keep us from experiencing our collective best.