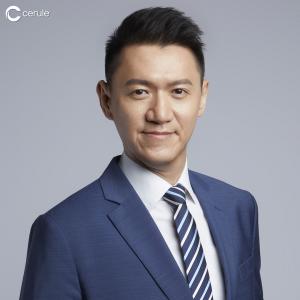 Leading International Biotech Company, Cerule, sees monumental growth in 2021 that results in an exciting expansion of their corporate team.

As Cerule continues to establish dominance in the 4.2 trillion dollar Health and Wellness Industry, they find themselves demolishing sales targets for 2021 with a growth improvement of 60% over prior year. With this tremendous growth, Cerule seeks to expand its corporate team and has appointed Roger Chi as General Manager of Cerule Taiwan.

Roger Chi is a native of Taiwan. Prior to beginning his successful career, he attended Taiwan’s first established private college, Tamkang University, founded in 1950. While there, he obtained his Bachelor’s Degree in Business Management which has greatly benefited him throughout his career history.

Upon graduating from Tamkang University, Roger’s career began in 2000 in the IT and Software industry where he served for 8 years as a Sales Project Manager, overseeing large-scale projects for high-end clientele. His profound success within this leadership role cultivated the characteristics and competencies he would need to transition into the competitive industry of Network Marketing.

Young and ambitious, Roger eagerly sought to develop his prowess and joined his first Network Marketing company. With no experience in direct sales, he worked vigorously for the next five years and was able to establish remarkable teams in Taiwan, Singapore, and Malaysia, landing him in the top ranks of his company. His tenacity and determination to be a fierce leader and competitor made him unstoppable.

In 2013, Roger decided to venture further down his chosen career path in the Network Marketing Industry. His exceptional accomplishments as a distributor fast-tracked him into the leadership ranks of Sales and Training Manager, Marketing Manager, and it wasn’t long before he became the esteemed General Manager. From 2013 to 2020, he led a multitude of international network marketing companies to success. He says, “the experience has taught me that the key to success is creating the correct environment and platform that assists Independent Business Owners (distributors) in achieving their goals.” It is no wonder why Roger’s next career leap into Cerule International was as smooth and seamless as ever.

When asked why he decided to join the Cerule family, this was his response, “The answer is simple. I joined because of Cerule’s founders.” Roger understands that the most successful contributors within a company are those who feel the support and passion of its leaders and this support shines through with a thoughtful remark from Cerule’s CEO and Co-Founder, Jono Lester.

“Roger is an accomplished executive with extensive experience in our industry in Taiwan and Southeast Asia. I am delighted he agreed to join our team as General Manager. Taiwan has long been one of our highest performing markets, and I look forward to Roger bringing his skills and experience to our team there,” said Jono Lester, Chief Executive Officer, and Co-Founder.

Roger further shares with us the defining moments that captivated him and sealed his partnership with Cerule’s Founders as their newly appointed General Manager in Taiwan.

“In November 2020, I met with CEO and Co-Founder Jono Lester in Taipei. We talked a lot about Taiwan’s MLM market and exchanged views with each other. At that time, I thought to myself, “If I could work with Jono, that would be amazing!”

In May 2021, I received a message from Jono and we set up an online meeting with another important person at Cerule. He leads the entire Cerule business market towards success and is also a Co-Founder of Cerule and Chief Sales and Marketing Officer, Andy Goodwin. During our meeting, I felt Andy’s gentleness, caring about what I want to achieve in my career and what I enjoy doing outside of work. His clear mind and thinking was refreshing. All of this made me want to join Cerule and have the privilege to work alongside Jono and Andy. I have always believed that a successful corporation starts with the founders.

The next thing I knew, I received an invitation to become the General Manager for Cerule in Taiwan and joined this awesome family in June 2021. With a powerful biotech background and unique products, I believe we can really help IBOs build extraordinary lives,” said Roger Chi.

Cerule looks forward to a bright future in Taiwan with Roger Chi at the helm. The company continues to flourish with Andy and Jono’s perpetual innovation and we expect continual, momentous growth as they prepare for their latest arrival of a new line of products that include New Zealand’s exclusive Manuka Honey. Look out world, Cerule International Co-Founders have established their ground and have proven to be unstoppable.