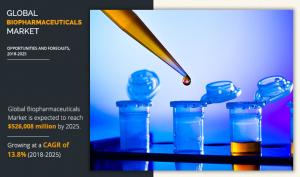 PORTLAND, OR, UNITED STATES, September 8, 2021 /EINPresswire.com/ — Biopharmaceuticals, also known as biologics, are drugs that are manufactured in living systems, such as microorganisms and animal cells. An array of different biopharmaceuticals is also produced using recombinant DNA technology. The biopharmaceuticals sector is the fastest-growing segment of the pharmaceutical industry.

According to a new report published by Allied Market Research, titled, ” Biopharmaceuticals Market by Type and Application: Global Opportunity Analysis and Industry Forecast, 2018-2025, the market was valued at $186,470 million in 2017, and is projected to reach $526,008 million by 2025, growing at a CAGR of 13.8% from 2018 to 2025. North America is anticipated to be the highest revenue contributor throughout the forecast period.

The global biopharmaceuticals market is anticipated to grow considerably in the near future, owing to various factors, such as strategic collaborations among biopharmaceuticals companies, increase in obesity and sedentary lifestyle among the population, rise in elderly population, and upsurge in prevalence of chronic diseases, such as cancer, globally. However, high costs associated with biopharmaceuticals drug development and a stringent regulatory scenario are key factors expected to impede the market growth. On the contrary, emerging markets, such as India and China, are anticipated to provide lucrative growth opportunities to the market players during the forecast period.

By type, the monoclonal antibody segment accounted for nearly two-fifths share of the global biopharmaceuticals market in 2017. In terms of application, the oncology segment accounted for one-third share in 2017, and is projected to exhibit a prominent growth rate, owing to surge in cancer prevalence globally. By region, North America generated the highest revenue in the global biopharmaceuticals market in 2017.

North America held the highest market share in 2017, owing to high prevalence rate of cancer and other chronic diseases, adoption of biologics, and increase in awareness about biopharmaceuticals. The Asia-Pacific region is expected to grow at the highest CAGR of 17.2% during the forecast period, owing to rapid industrialization in the area, increase in disposable income, and upsurge in government initiatives to modernize the healthcare infrastructure.
The report provides an extensive competitive analysis and profiles of the key market players, such as Abbott Laboratories, Amgen, Inc., Biogen, Inc., Eli Lilly and Company, F. Hoffmann-La Roche, Ltd., Johnson & Johnson, Merck & Co., Inc., Novo Nordisk A/S, Pfizer, Inc., and Sanofi. The other players in the value chain (not included in the report) include Bristol Myers Squibb Company, Bayer AG, and Shire plc.