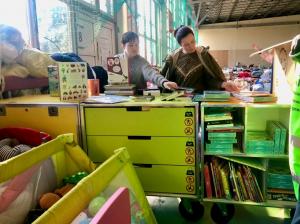 Idea Box at the Hrubieszow gymnasium in Poland

Multimedia Kits Aim to Serve 100K During Next Three Months

PARIS, FRANCE, April 8, 2022 /EINPresswire.com/ — In response to the 4.2 million Ukrainians who have fled the war with Russia, Bibliothèques Sans Frontières (Libraries Without Borders) is mobilizing to establish emergency, information and integration solutions for the refugee population, the organization announced today.

The Paris-based nonprofit is currently deploying emergency multimedia libraries – in the form of “Ideas Box” kits — at two sites in Poland: the Hrubieszow gymnasium, about ten kilometers from the Ukrainian border, and at a former shopping center used as a refugee transit center in Korczowa, 2km west from the border, facing the Ukrainian city of Lviv.

Transformed into an emergency accommodation and transit centre, the space welcomes and aids almost 700 refugees every day, most of whom are women and children. Bibliothèques Sans Frontières has joined the effort to assist migrants: over the next few weeks, Ideas Box kits will be deployed to strategic locations along the Ukrainian border. This network of emergency multimedia libraries will provide access to reliable news and immigration information, books, games, internet connectivity, and digital technology. The first library began operating on the Polish border on March 14th and over the next three months, the Ideas Box kits will serve nearly 100,000 people.

In humanitarian crisis and conflict situations, access to quality information is a necessity. Rumors and the spread of false information have devastating effects on already fragile populations. By creating safe and engaging information hubs, Bibliothèques Sans Frontières enables refugees to make the right decisions at the most critical moments while also offering families, especially children, a moment of relief in the midst of their ordeal.

Since Russia’s invasion at the end of February, 4.2 million Ukrainians have fled to Poland, Romania, and other parts of Europe – a number that could swell to 5 million by next month.

The rapid deterioration of the security situation in Ukraine following the Russian offensive is leading to massive population displacements within the country and beyond its borders – mainly in Poland, Hungary, Moldova, Slovakia, and Romania.

In Hrubieszow, the Ideas Box provides families with novels and children’s books in Ukrainian selected by as well as board games and computers to offer a moment of relief and escape during hardship. They also have access to creative materials for drawing, painting, photographing, writing, and filming. The Hrubieszow library staff has been trained to operate the Ideas Box and organize fun and educational activities daily for those present, whether it be for a few hours or several days. In this unprecedented context, the organization has developed an action plan to support refugees in two ways:

Emergency Support, Information and Protection
• Creation of 10 Ideas Box hubs for emergency information, protection and psychosocial support at the borders of Ukraine
• Emergency libraries in shelters and accommodation centers in France, Belgium and Italy

In addition to primary needs, the issues related to protection, orientation, information, and psychosocial support for migrants – mainly women and children – are also absolute priorities. In the coming months, the reception and integration of millions of refugees in European countries will be an immense challenge that must be met collectively.

Founded in 2007 and headquartered in France, Bibliothèques Sans Frontières is an international non-profit that strengthens the capacity of people in vulnerable situations by facilitating access to education, culture, and information. In more than 30 countries, the organization creates innovative cultural and learning spaces that enable those affected by crisis to learn, to play, to build communities, and to construct their futures.

The American branch of Bibliothèques Sans Frontières – Libraries Without Borders US – is headquartered in Washington, D.C. and oversees all work in the United States.