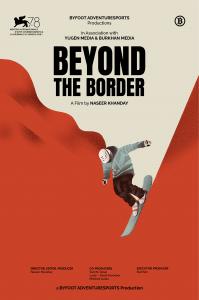 B to B is Premiering at on Tuesday September 7th at the Venice Film Festival use, BITCOIN in order to partially finance the production of the film

VENICE, ITALY, September 7, 2021 /EINPresswire.com/ — BEYOND THE BORDER-A Burkhan World and Yugen Media Documentary Premiering at the Venice Film Festival About Afghanistan Funded In Part by Crypto

BEYOND THE BORDER A Documentary that is Premiering at on Tuesday September 7th at the Venice Film Festival used a unique method of finance , crypto, in order to partially finance the production of the film. Suril Desai CEO of Yugen Media used some of his profits gained from BTC (Bitcoin) to fund the initial production of the film, that focuses on a story of joint cultural collaboration and inclusion.

Mr. Desai stated, “using crypto to partially fund such an important story at this time through Alt finance shows how innovation can help people around the world and it not just used for monetary gains but good”.

Mr. Desai additionally stated that a future program to offer an NFT based on the film in collaboration with Burkhan Media will be in the works and announced shortly. This will enable the producers to additionally raise funds to produce the next four documentaries they have planned on cultural inclusion in Central and Southeast Asia.

Shahal Khan CEO of Burkhan World added “Burkhan through its investments in Media, Gamification, Fintech is investing in infrastructure that will allow places such as Afghanistan and other areas of the world where people need an income to support their families. Our vision is to help develop economies from the ground up so people have hope of peace through financial inclusion”.

Burkhan has three $250 million dollar SPACS it has planned to list on the NASDAQ later this fall focused on the Fintech, Quantum/AI and Media Content/GameFi areas which it will utilize to further enhance companies that are innovative.

Burkhan’s investee company TEMPUS will be releasing soon its own Engagement platform, TEMPUS NETWORK, that will allow an engage to earn model through gamification. People from places like Afghanistan and other developing and financially strained markets that rely on only aid could gain economic freedom by earning tokens called TEMPUSPAY, which will convert to local currency.

Beyond the Border Trailer: https://youtu.be/1p7atc-zsG0