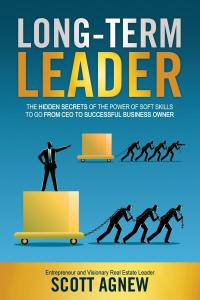 Scott Agnew, author of Long-Term Leader says “The most important skill is to manage yourself.”

Regardless of how smart, charismatic, well dressed, or other attributes that make you a likable person, without building your character you’re never going to reach the gold standard of leadership.”
— Scott Agnew

BEVERLY HILLS, CALIFORNIA, UNITED STATES, August 3, 2022 /EINPresswire.com/ — Today, Beverly Hills Publishing announced the release of Long-Term Leader by author Scott Agnew, Entrepreneur and Visionary Real Estate Leader. Long-Term Leader demonstrates How a great leader is great at helping people create their ideas. Scott believes there is always a way to get where you want to go when you are clear on your values.

The number one quality of the highest-level leaders is empathy.

“What do you think is at the root of the great resignation that is happening right now? Employees don’t feel understood. They don’t feel appreciated. They don’t feel recognized as human beings, especially in the younger generation. There’s a term in the millennial world, called pawn. They don’t want to be a pawn and have their dignity trounced upon by a tyrannical king.”

New statistics via Zippia show that 79% of employees will quit due to a lack of appreciation and 48% of employees view their company’s leadership as “high quality.” Only 5% of businesses have implemented leadership development at all levels.

Regardless of how smart you are, charismatic you are, well dressed you are, or any other attributes that would make you a likable person, without building your character you are never going to reach the gold standard of leadership.

Scott Agnew was destined to become a leader from a very early age. Having lost his father at eight years old, dealing with family debt and his mother’s illness, he learned selflessness and how to believe in himself. Through hard work, perseverance and determination, Scott’s Real Estate Brokerage has developed into the fastest growing in the franchise system and held the #1 market share in Utah for the last six years.

Long-Term Leader is now available in hardback as well as digital download.