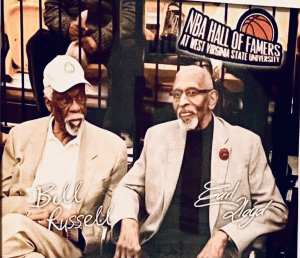 MIAMI BEACH, FLORIDA, UNITED STATES, August 4, 2022 /EINPresswire.com/ — In conjunction with its partnership with Icon Sports (powered by Broker Brothers Transactions), Baller Mixed Reality has signed an agreement to produce and sell 3D-AR NFTs from NBA legend, Earl Lloyd. In 1950, Lloyd broke the color barrier to become the first African-American to play in the National Basketball Association, followed by a distinguished career.

Lloyd endured intense discrimination before helping the Syracuse Nationals win the NBA Championship in 1955. He then became the league’s first Black Assistant-Coach in 1965 and was inducted into the Naismith Hall-of-Fame in 2003. Entering the league six years before Bill Russell, Lloyd was often described as the “Jackie Robinson of basketball” passed away in 2015 at the age of 86.

Baller will produce unique digital assets autographed by Lloyd which, unlike other NFTs, can be placed into real-world environments and viewed from 360 degrees in high-definition 3D – both within and outside of the metaverse. Additionally, the authenticity and ownership of Baller’s limited-edition assets will be verifiable on the blockchain, eliminating the potential of fraud or counterfeit.

About the partnership with Baller Mixed Reality, Lloyd’s son Kevin said… “The memorabilia that my father left behind are historical treasures that remind us of both the differences and similarities within the times we live. I’m excited to work with Jonathan Herman and the Baller team to digitally capture these items into Augmented Reality, where their quality can be maintained forever and fans around the world can enjoy them as limited edition NFTs.”

Look for these special collectibles to become available on Baller Mixed Reality’s store on OpenSea, and join Baller’s Discord to stay informed of upcoming drop dates.

ABOUT ICON SPORTS
Powered by Broker Brothers Transactions, Icon Sports is a custom sports memorabilia and trading card company that works with numerous professional athletes across all major sports.