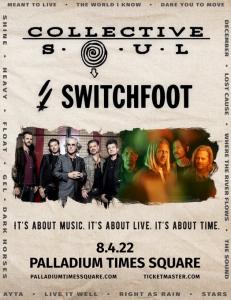 Collective Soul and Switchfoot will perform at the “crossroads of the world” this summer, playing New York’s Palladium Times Square on August 4, 2022.

These are two incredible bands, and they are going to make for an amazing night of music at Palladium Times Square. We couldn’t be more excited to share this evening of entertainment.”
— Josh Baker

NEW YORK, NEW YORK, UNITED STATES, March 28, 2022 /EINPresswire.com/ — Baker Concerts is pleased to announce that Collective Soul and Switchfoot will be performing on August 4, 2022 at Palladium Times Square in New York as part of their national summer co-headline tour. These hitmaking artists have been dazzling audiences around the country and are ready to rock the stage at the crossroads of the world this summer.

“These are two incredible bands, and they are going to make for an amazing night of music at Palladium,” says Josh Baker of Baker Concerts. “It’s great to be able to bring acts like these to a first class venue in the heart of New York. We couldn’t be more excited to share this evening of entertainment.”

Tickets for the Collective Soul and Switchfoot concert at Palladium Times Square are on sale this week, beginning with a special Artist Presale that launches on Tuesday, March 29 at 10 a.m. There is a Spotify presale as well, which begins on Wednesday, March 30 at 10 a.m., with the General + VIP onsale beginning Friday, April 1 at 10 a.m.

Additional show info and ticket information are available at BakerConcerts.com, PalladiumTimesSquare.com and Ticketmaster.com.

Collective Soul celebrated its 25th anniversary in 2019, releasing their 10th studio album to critical acclaim. Blood debuted at No. 3 on Billboard’s Alternative Albums chart, helping inject new material into the band’s live sets. “I think Blood is the beginning of a lot of good music to come,” singer and songwriter E Roland said after its release. “I think it’s the best we’ve ever done.” The band had rocketed to fame with the 1993 Shine, the lead single to the multi-platinum album Hints Allegations and Things Left Unsaid.

Switchfoot has sold nearly 10 million copies worldwide, releasing their 12th full-length album interrobang in August of 2021. The album was recorded “in a burst of pent-up mid-pandemic creativity” in 2020 and 21. They have performed sold-out tours in front of millions of fans in over 40 countries following their breakthrough 2003 double-platinum album The Beautiful Letdown, which helped launch the band with a string of alternative radio hits. In 2011, Switchfoot’s seventh studio album Hello Hurricane won the Grammy for Best Rock Gospel Album.

Palladium Times Square is a state-of-the art venue in New York City’s Times Square, the nexus of world culture and entertainment. It is located at the corner of 44th Street and Broadway in the heart of Manhattan.