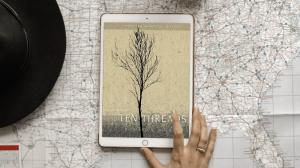 Perception shapes our destiny more than any other power on earth.”
— Richard R. Becker

LAS VEGAS, NEVADA, UNITED STATES, May 21, 2022 /EINPresswire.com/ — Wisconsin-born Nevada author Richard R. Becker released Ten Threads, a ten-story companion to his best-selling debut collection. The book, published as a Kindle exclusive by Copywrite, Ink., can be read as a stand-alone anthology of about 100 pages or as a continuation of stories found in the author’s debut, 50 States.

“There was an additional challenge in writing stories that could fit together with the debut or not, but tying everything together is by design,” said Becker. “All of my stories and longer works will eventually intersect — paths that cross, divide, and double back.”

This release features stories set in Idaho, Louisiana, Wisconsin, Utah, Pennsylvania, California, Vermont, Nevada, Maine, and Kentucky. While all of the stories can stand alone, Becker says eight of the stories will feel like continuations for anyone who has read 50 States.

“One of those is North Forty, which is also the first that unites two characters from different stories,” says Becker. “It introduces Rauly from New Hampshire to Rachel from Vermont. The story is told along Rachel’s timeline but from Rauly’s point of view, one year after his run-in with organized crime — a story I’ll save for another time.”

The remaining two stories, Wisconsin and Nevada, are also connected to their counterparts in 50 States. However, they aren’t strongly linked.

“While some stories will eventually become longer works, I’ve always intended northern Wisconsin to remain a collection of stories,” Becker said. “Conversely, the Nevada story in Ten Threads is an introduction to a novel set in Las Vegas, 1978.”

Currently, Becker is alternating between the novel and more short stories for a second anthology. He is also writing another group of short stories that are considerably longer than those found in 50 States or Ten Threads.

“I tend to write like some people garden, giving attention to whatever needs it the most,” said Becker. “Sometimes I’m as surprised as anyone.”

Becker originally started writing as part of a project to write 50 stories in 50 weeks, which eventually became 50 States as he noticed many of the early stories took place in different states. After a soft launch last year, 50 States eventually spent three consecutive months on Amazon’s top 100 bestselling literary short story category in 2022. It also won first place for short stories in the Spring 2022 BookFest Awards and first place in the ABR Book Excellence Award Contest.

Richard R. Becker was born in Milwaukee and raised by his grandparents during his early years. He worked his way through school, attending Whittier College and the University of Nevada, Reno. After graduation, Becker worked as a journalist, copywriter, creative strategist, publisher, university instructor, and entrepreneur. After 30 years of telling other people’s stories, he drew upon personal experiences to tell some of his own.

When he isn’t writing, Becker has a broad range of interests, including travel, fitness, and spending time with his wife and two children. Visit him online at richardrbecker.com or copywriteink.com. Ten Threads is available for purchase at Amazon (https://www.amazon.com/dp/B09R6M4Q6W), and 50 States is available wherever books are sold.