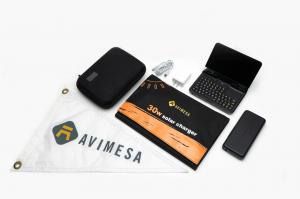 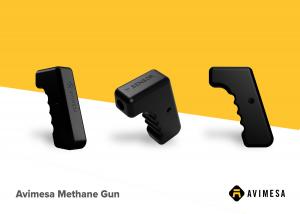 The SFU Travel Kit is aimed at pinpointing sources of methane, and the data generated can also be used as a significant financial indicator in ESG analysis.

To use the SFU Travel Kit, the user connects it to their smartphone for Internet access and explores the area for optimal locations to place the pole-mounted SFU. An optional LTE hotspot is available for users that prefer to not use their phone.

The handheld methane device uses the same software and methane, temperature, and humidity sensors as the pole unit and transmits data to the Avimesa cloud in real-time, making it instantly accessible to engineers and scientists at other locations.

Included with the SFU Travel Kit is:

• Avimesa Methane Gun — A handheld unit that includes methane, temperature, and humidity with self-calibrating logic. It connects via the RS232 port on the back of the included handheld computer.

• A GPD (6″ screen) handheld computer running Ubuntu Linux and Avimesa Gadget.
The user sees the readings in real-time while it is transmitting data to the cloud for sharing with other engineers and scientists.

• A lithium-ion auxiliary battery capable of powering the GPD for up to 10 hours without draining the built-in battery in the GPD. This is essential for long testing hours, especially at night when solar does not work.

• An Avimesa 30 watt solar charger to keep things charged for an extended time in the field.

• An Avimesa burgee flag. Not just for fun, this can be useful to get an idea of wind direction.

About Avimesa Corporation. Starting operation in early 2017, Avimesa is an Industrial Internet of Things company with a device cloud, IoT hardware, a web application for data visualization, and developer APIs that can be used to monitor virtually anything.

All trademarks are the property of their owners. The contents of this press release may be used in whole or part for reporting in the news, blogs, and social networking.