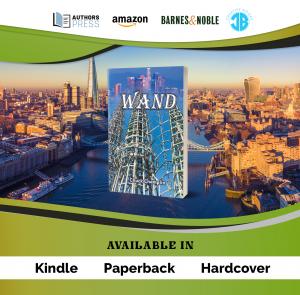 “I notice that each screen has a camera mounted in front of it, right at the center, pointing at
me and John. It’s disguised to look like a ray gun or something.”—”
— Excerpts from Wand by Chuck Champlin

LONDON, UNITED KINGDOM, March 28, 2022 /EINPresswire.com/ — Author Chuck Champlin will be one of the featured authors in the upcoming London Book Fair 2022 with his published book titled Wand, a novel set in late 1980s Los Angeles that embraces electronic communications technology as a
tool for community development.

Mysteriously, Chris Walkman is given $20,000 to change the world for the better, starting in his hometown of Los Angeles. Fired up by the cash, and by his own lively imagination, he sets to work, hires a homeless man as a co-pilot, and sets out to change things for the better.

In Wand, published by Authors Press, writing and global communications are seen as magical in their potential to improve life on our planet and link us in understanding and cooperation.

“The prose of Wand has a stream-of-consciousness style that matches Chris Walkman’s grandiose goals, in which entrepreneurial thinking from a community perspective builds its own momentum. Cinematic visions of the Watts Towers and community gatherings over satellite video punctuate the story . . . The technique is cartoonish. Set during the excess of the 1980s, the absurdist novel Wand takes on serious issues via the exploits of a daring artist.”
— Reviewed by Mari Carlson, Clarion Foreword Review.

Author Chuck Champlin has worked as a corporate communications executive for The Walt Disney Company, and as a writer and journalist. A philanthropist, Mr. Champlin also enjoys songwriting, bicycling and public speaking in Toastmasters
clubs. His earlier book, Think Like Molecule, celebrates the fantastic fact that matter in the universe has seemingly created our thinking minds all on its own.

Book copies are available at Amazon, Barnes and Noble, and other online book
resellers.