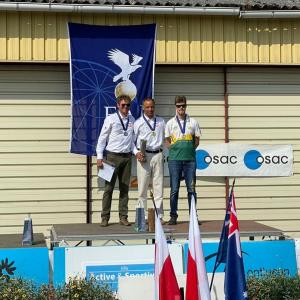 Matthew Scutter receiving his bronze medal on the podium 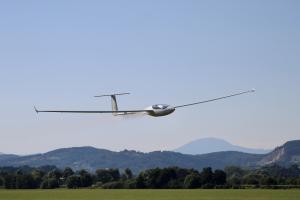 Scutter racing over the finish line

AUSTRALIA, September 5, 2021 /EINPresswire.com/ — Australian representative, Matthew Scutter, has won a Bronze medal in the 36th FAI World Gliding Championships at Montluçon, France. The competition was held in extremely challenging weather conditions from 8th to 20th August, and while most national teams fielded teams of six pilots and 30 ground supporters, Matthew attended as the only Australian pilot, without any ground support due to coronavirus travel restrictions. Even now it remains unclear when he will be able to return home to Australia.

“It was by far the most difficult contest I’ve ever flown in, with strenuous conditions both on the ground and in the air.” says Scutter.

After the World Championships, Scutter then went on to compete in the world E3Glide competition held in Varese, Italy where he claimed First place. The race, held over 8 days, is a new concept in glider racing. Electric-engined gliders race in the traditional soaring but can use their engines tactically for limited periods during the race in order to cross areas of poor weather or inhospitable terrain. This new technology allows racing even outside the summer soaring season and a variety of new tactics.

“Varese is an extraordinarily diverse and challenging site to fly, but the eGlide concept makes it possible for even beginner mountain pilots to compete effectively as most mistakes can be papered over with a bit of engine time.” Scutter states.

The 37th FAI World Gliding Championships will be held in Narromine, Australia in 2023.

About Gliding: Gliding competition is a competitive air sport in which pilots fly unpowered aircraft competing for the fastest speed around a task. Gliding Australia is the national sporting body for gliding in Australia from pre-solo through to international competitions.