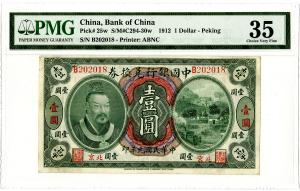 China, $1, P-25w, S/M#C294-30w, Issued banknote, Green on m/c, Emperor Huang-ti at left, Hillside village and railroad at right, back green with graffiti, Back has printed in ornate printing “One Dollar” with “Peking” printed in the bottom excess margin, 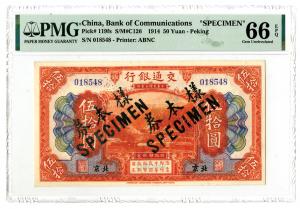 We are privileged to offer numerous rare and desirable Chinese & Worldwide banknotes, and bonds, and shares that are rarely seen at auction in our February 23rd, 2022 auction in River Edge. NJ”
— Dr. Robert Schwartz, President of Archives International Auctions LLC.

The auction begins with World Banknotes, from countries Angola to Yugoslavia, highlighted by 137 lots of Chinese banknotes and bonds and 69 lots of Russian banknotes, with all of these from an old-time collection being offered for the first time at auction. Some of the many Chinese banknote highlights include a Bank of China, 1912, $1, “Peking” Branch Issue rarity; 1919, Shanse Provincial Bank, “Tientsin” Branch issue discovery note that was previously unlisted; Central Bank of China, 1949 Unlisted Face & Back Essay Banknote, Gold Yuan Issue; dozens of desirable and rare Chinese high-grade banknotes; and a Bank of Taiwan – Kinmen Branch. 1955 high-grade issue banknote. Additional highlights of the World Banknote section include a desirable Lebanon, Banque de Syrie et du Grand-Liban, 1925, 25 Piastres, P-2 banknote rarity; a Mexico, 1897, highest graded and issued banknote, the only example graded in the PMG census with no examples of this type ever having been offered previously at auction; and, 3 different Mongolia, 1941 issue Specimens from the Commercial and Industrial Bank rarely seen in this format.

Russia is represented by 69 lots of high-grade as well as rare banknotes covering the pre and post-Russian Empire time period including private and local Russian banknotes with many rare notes seldom offered in the high grades found in this collection.
Some of the many Russian banknote highlights include 5,000 and 10,000 Ruble, 1919 State Currency Notes in high grade; a full assortment of 1918 State Treasury Notes from 1 Ruble to 1000 Rubles in attractive and some very high Uncirculated grades; the 1922 series State Currency Notes include 3 Rubles to 1000 Rubles in various grades, mainly Choice AU to Uncirculated and many other desirable Russian notes.

Included in the U.S. section of the auction are 15 lots of Colonial and Revolutionary U.S. period banknotes and fiscal documents from a new find including a group of 1772 and 1773 Pennsylvania Colonial banknotes as well as pre-independence and post-independence New York and Connecticut fiscal documents highlighted by a historic May 6th, 1776 receipt for Ringwood Iron Works, which manufactured the links for the Hudson River Chain that blocked and limited the ability of the English to sail up the Hudson River during the Revolutionary War.

Also included are hundreds of rare and desirable banknotes with many interesting lots from an old-time dealer’s stock as well as numerous items from old estate collections and consignments. The auction also includes 50 lots of Historic Ephemera and Security Printing Ephemera with many desirable and rare items offered.

Some of the many scripophily items highlighted in the auction include specimen stocks and bonds from numerous well-known banking, finance, and tech companies such as Apple; Amazon; Lehman Brothers; the NYSE Group (New York Stock Exchange); Berkshire Hathaway; Bear Stearns, and many other well-known and in some cases notorious companies in U.S. financial history. Additional highlights in the scripophily portion of the auction include many well-known transportation items including an automobile share certificate from Tucker Corp.; a Yellow Cab Company specimen certificate from the 1930s and numerous aviation items including stocks from Cessna Aircraft and Bendix Aviation. World bonds and shares include a historic 1825, Spanish, Real Compania de Guadalajara 100 Pound Sterling Bond that was issued in London and Paris; Fraternal organizations include an 1832 Louisiana, New Orleans Concordia Lodge of Ancient York Masons, No. 3 Bond; numerous mining, navigation and railroad stocks and bonds highlighted by a Montana Territory, Rocky Fork, and Cooke City Railway Company 1887 Specimen Bond rarity and many other desirable bonds and shares rarely offered to the public.

Previews will be limited and by appointment only and we will be observing strict safety precautions including the wearing of masks and observing social distancing to protect our team as well as our guests. We will do our best to accommodate anyone who desires additional information and photographs. For questions, please call 201-944-4800 or email info@archivesinternational.com.

Archives International is now working on their late Winter and Spring 2022 auctions and is seeking quality consignments for future auctions or outright purchases including U.S. and worldwide banknotes, coins, stocks, bonds, stamps, postal history, historic ephemera, and autographs. To sell or consign one piece or an entire collection, please call AIA at (201) 944-4800; or email them at info@archivesinternational.com