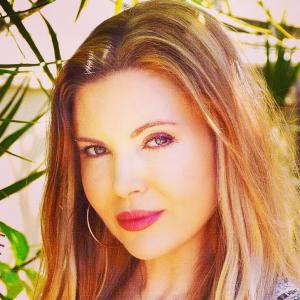 Angelena – Creator of “Change The World” 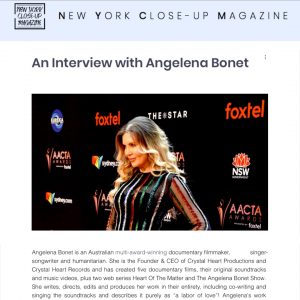 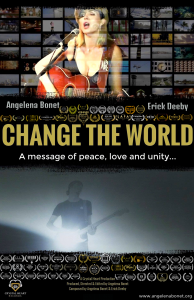 If you had told me years ago that one day I would make a documentary film and soundtrack to share my story I wouldn’t have believed it. I feel very grateful for the wonderful support I have received!”
— Angelena Bonet

SYDNEY, NEW SOUTH WALES, AUSTRALIA, February 6, 2022 /EINPresswire.com/ — Angelena Bonet’s biopic documentary “Change The World” which she has produced, directed and edited in their entirety, has won more than 300 film festival awards worldwide thus far. Bonet recently won ‘Grand Prix | Best Female Director 2021’ at the Nicomedia International Bi-Monthly Film Awards in Turkey. The inspiring film also recently screened in Brazil, Sweden and Canada and she has been the recipient of many special awards including the ‘Humanitarian Award’ at The Jane Austen International Film Festival and the ‘Human Spirit Award’ at the DOCS Without Borders International Film Festival in The Bahamas. Angelena’s interview with New York Close-Up Magazine is out now. She shares details of her life as a filmmaker and why she chose to create a biopic documentary and about composing the soundtrack.

Angelena has also created a documentary feature film tetralogy and two web series. Her documentaries chronicle her life to the present day. She has a remarkable story of tragedy and resilience and triumph over such adversity and is inspiring and touching hearts all around the world. Her soulmate and fiancé of three days, Erick Deeby, suddenly and unexpectedly passed away in August 2007. He had written and recorded instrumental pieces of music for her between 2005 and 2007. Bonet then wrote the lyrics and melody to his music after his devastating death and during her time of deepest grief. Whilst living in Sydney’s bohemian red light district of Kings Cross, they developed the sound of their music over a couple of years. Erick had also composed and produced music for various bands and had songs in soundtracks for Marvel Comics “Man Thing” and “Feed” directed by acclaimed Hollywood director, Brett Leonard (“Lawnmower Man” by Stephen King & Denzil Washington’s “Virtuosity”) before his sudden and unexpected death in August 2007. Angelena promised him whilst in a coma that someday, somehow she would finish their special project. She has kept her word and produced their album at Fox Studios Australia thirteen years later. The music she co-wrote with Deeby has become the soundtrack for her films and also won numerous ‘Best Original Soundtrack’ awards worldwide.

As a global ambassador for women and girls, Angelena is a voice for those who cannot speak, or those struggling to heal. Angelena recently released “Change The World” on Vimeo On Demand. Domestic violence has risen exponentially since the Covid-19 global pandemic began and many victims are in lockdown with their abusers. Angelena hopes to reach those women and give them hope and assure them there is light at the end of the tunnel and they are definitely not alone or forgotten. Her film has gone global and her voice and personal story is inspiring and resonating in every culture.

New York Close-up Magazine is associated with the New York Tri-State Organization but works independently. With this magazine, they are trying to introduce and promote the latest projects in cinema, television, music videos and screenwriting. They are hoping to be able to focus on both old and new films and shows, and try to show the best of both worlds. They want their readers to get familiarized with the faces behind these great works of art, and focusing on these aspects of art can be quite a complex and specialized task. In this magazine, their main task is to shine the spotlight on creative artists, who try to add something unique to the world of arts; filmmakers, producers, actors, screenwriters and many others who contribute greatly to cinema and television. Currently, New York Close-up Magazine only operates on a digital platform, but have plans to get it on paper in the near future.