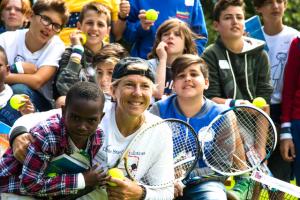 LOS ANGELES, CA, USA, August 3, 2021 /EINPresswire.com/ — Andrea Jaeger has received tons of attention for her serves over the net. But it has been her service off the court that’s been the real “ace.”

Her book, First Service: Following God’s Calling and Finding Life Purpose, chronicles how the tennis phenomenon dedicated her life to religion and philanthropy. Finding the sport uninspiring and desiring a greater purpose, the memoir recounts how the young tennis star discovered her true calling.

After retiring from professional tennis in 1985, Andrea Jaeger immediately embarked on a new career of service. Her global reach has grown since then, leading to the creation of the Little Star Foundation. The nonprofit has a simple goal. It hopes to improve the lives of children who are sick or in need, encouraging these unprivileged participants to “endure just one more day” in the face of adversity. Programs are designed to support this, with activities that boost each child’s mental, physical, and emotional health. Now in its 36th year, the Little Star Foundation has earned countless honors and achievements for their work. Even without the awards, the organization stands out as her greatest accomplishment.

But Andrea Jaeger dominated on the court as well. In First Service, she details her rise to fame at an early age. When only 15 years old, she was the youngest to ever be seeded at Wimbledon. At the time, this was a record. She went on to earn the No. 2 ranking in the world, eventually reaching the semifinals or finals at least once in every Grand Slam. Although tennis provided an opportunity, it was never her real mission. In fact, none of this would have been possible without tennis. Andrea Jaeger used her platform (and proceeds) to fuel her true passions. Even today, she competes in celebrity tournaments, only to donate all her earnings.

She hasn’t been without her own struggles. However, when injuries derailed her career, Andrea Jaeger continued to persevere. It’s evident that faith drove her pursuits. Her devotion to God has been active throughout her entire life. The pages of First Service are littered with her commitment, belief, and unwavering faith. In telling the story of her life, Andrea Jaeger also shares a spiritual journey that began even when she was a child.

Although First Service was initially published in 2004, it’s never been more relevant. Mental and personal health amongst athletes has gained more prominence (and headlines). As many in professional sports dedicate more time away from the court, Andrea Jaeger was a trendsetter in many ways. In fact, she led the charge. She walked away from the height of her game to pursue other, more rewarding interests.