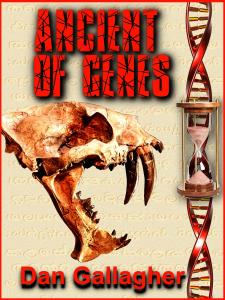 Fact-based Amazon Bestseller, razor close to:
1. REAL genetics technology now, and to
2. the only prophecy in common among religions & myth traditions!

NEW YORK, NY, UNITED STATES, January 3, 2022 /EINPresswire.com/ — A geneticist’s regeneration of Ice Age animals AND humans is stolen and becomes the basis for genetic warfare weapons – and the prophesied Resurrection of the Dead!

Cloning sheep and chimps was only a beginning. Using Fossil Gene Redemption (FGR), geneticist Kevin G. Harrigan experiments with genes from a frozen “Ice Man”. His work prompts Iraqi leader, Ishmail Mon, to provide resources for exciting new research that enables Harrigan’s team to regenerate extinct “cryptids” and human sub-species from the Ice Ages. But FGR can be the basis for genetic weapons of mass destruction; United States intelligence and defense leaders must act!

Radically distinct from Jurassic Park, Ancient of Genes shows new megafauna regeneration methods by which the only prophecy held in common among major religions & myth traditions could manifest: Some form of regeneration of human ancestors and megafauna. Once considered junk DNA, personality genes and other traits archive in lineages. These genes await a virus vector that targets meiosis to re-express them in all subsequent generations. This can start a resurrection cascade enabling Mon to ruin enemy genomes, improve his allies’ genes… and inherit the earth.

Harrigan’s frightening choice can lead to redemption… or the terrifying sunset of humanity!

——————————–
…Spellbinding, well-researched and has intriguing characters. …A page-turner as we get to learn about the growth and development of the characters over the span of 16 years. Feeling a deep, emotional connection with the protagonist and other characters is inevitable. The author… explain[s] complex scientific ideas in a comprehensible manner… real-world scientific research… intriguing storyline, superior storytelling craft, rich world-building.
— The Book Commentary (David Reyes, author, reviewer)
——————————–
Ancient of Genes recently slammed on to the bestseller list, no doubt due to its inspired plot and oh so very intriguing characters that draw you deeper into the plot with each and every page. This brilliant author has delivered readers a read that hits all the sweet spots and beyond, making this an epic read….
— USAReformer (Tracey Williams, Ph.D., author, reviewer, professor)
——————————–
A phenomenal book… the setting, descriptiveness and raw energy captivate, all coming together to have the reader turning pages effortlessly.
— Digital Journal (Markos Papadatos “Best Long Island Personality” in Arts & Entertainment)
——————————–
9 stars out of 10, but we’ll round up! Gallagher lays out the underlying science in Chapter One, priming the engines. Then the plot takes off like a rocket. There are plenty of evolving characters, with powerful motivations and inspirations. Even human sub-species stand on their own. Gallagher excels, too, in his action scenes and creature encounters. The plot and intrigue are multilayered. Read Ancient of Genes now!
— SubCreated-Worlds (Josh Griffing, author of Pyre & Ice and The Wayward Sun Universe)
——————————–
26 Prior version reviews by bestselling authors & pro reviewers at AncientOfGenes.com & in front matter.
——————————–