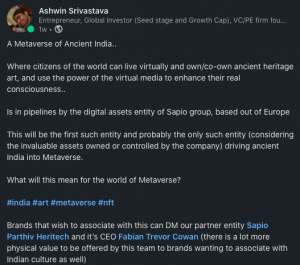 Announcement by CEO of Sapio Analytics

ZURICH, ZURICH, SWITZERLAND, March 6, 2022 /EINPresswire.com/ — A new digital universe has been announced by the official handle of Mumbai headquartered government advisory firm Sapio Analytics. The announcement mentions formation of a Swiss entity that shall undertake the creation of a new virtual world, popularly called Metaverse, that shall recreate ancient India.

The Switzerland-based entity shall use exclusive digital assets recreated from artworks and other elements belonging to ancient India, having been restored to their original glories. Through use of such assets, and additional implementation of new age technologies, the Metaverse shall offer partial or full ownership of properties based in ancient India. “The larger purpose of such a Metaverse is to create a world that can elevate consciousness of human beings, by bringing the best of ancient cultures, and presenting the same in the modern world, with a deep focus on extracting value from patterns and hidden messages analysed through artificial intelligence”, read the statement.

With support from Government of India bodies and through use of works by legendary artists such as art historian Benoy K Behl and spiritual artist Udayraj Gadnis, Sapio Analytics and its sister companies have created a bank of information and properties that is being used by the Swiss company to create first ever virtual universe from ancient times.

Metaverse was mentioned by the CEO of Facebook Mark Zuckerberg in his announcement to the world recently, and has since formed a critical component of works by proponents of new age virtual technologies. Attempts to create virtual universe in the context of social media and other engagements between people have been initiated by companies across the globe. Announcement of a virtual universe that recreates ancient India and creates a universe for the modern world to elevate their consciousness is the first ever announcement of such grand scale. It remains to be seen if this can help transform the way we see our modern physical universe.