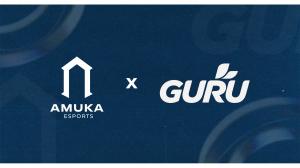 I’m thrilled that Amuka has the ability to build something even bigger through a long-term partnership with Canada’s leading organic energy drink brand”
— Ben Feferman, CEO Amuka Esports

As the world’s first natural energy drink, GURU is on a mission to clean up the energy drink industry. With its organic plant-based ingredients, GURU will provide Amuka Esports players with the Good Energy it is best known for, helping players maintain their mental and physical focus.

The objective of the partnership is to enhance brand awareness around GURU’s line of plant-based and organic energy drinks among the esport community. This will include in-person activations at Amuka’s gaming venues in Toronto, Windsor and upcoming Ottawa location. This will be supported by a multi-channel campaign involving authentic partnership with some of Amuka’s most recognized content creators and players, along with some original media assets.

“It has been amazing to partner with GURU Organic Energy, and to get them acquainted with the gaming world. Following several successful activations last summer, I’m thrilled that Amuka has the ability to build something even bigger through a long-term partnership with Canada’s leading organic energy drink brand,” said Ben Feferman, CEO of Amuka Esports

Amuka’s competitive team, Parabellum Esports, will be decked out in new GURU branded jerseys and will be representing the brand at several major upcoming esports events including the Rainbow6 Pro League Relegation Game in Las Vegas and the Women’s Carball Championships.

About Amuka Esports
Amuka Esports is a diversified esports company focusing on teams, tournaments, content, and venues. We create localized hubs in cities across North America, each consisting of a venue, tournament organizer, content team, merchandise brands, and incubator. Amuka also operates Canada’s largest esports venue along with several teams based in North America and Europe. Learn more about our impact on the North American esports scene at our official website, www.amukaesports.com and on our Twitter, Instagram, Youtube, Twitch and Facebook pages.

About GURU Products
All GURU energy drinks are plant-based, high in natural caffeine, free of artificial sweeteners, artificial colours and flavours, and have no preservatives. In addition, all drinks are organic, vegan and gluten free – and the best thing is their amazing taste.

About GURU
GURU Organic Energy Corp. (TSX: GURU) is a dynamic, fast-growing beverage company launched in 1999, when it pioneered the world’s first natural, plant-based energy drink. The Company markets organic energy drinks in Canada and the United States through a distribution network of more than 21,000 points of sale, and through guruenergy.com and Amazon. GURU has built an inspiring brand with a clean list of organic plant-based ingredients. Its drinks offer consumers good energy that never comes at the expense of their health. The Company is committed to achieving its mission of cleaning the energy drink industry in Canada and the United States. For more information, go to www.guruenergy.com or follow us @guruenergydrink on Instagram and @guruenergy on Facebook.