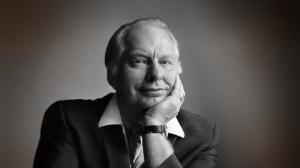 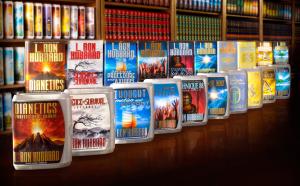 The materials of Dianetics and Scientology include 3 encyclopedic series and some 3,000 taped lectures. His philosophic contribution represents over 75 million written and recorded words, the largest single body of work on the human mind and spirit. 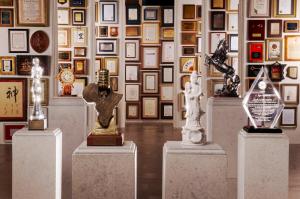 Several of the thousands of recognitions and proclamations awarded to L. Ron Hubbard in acknowledgment of his contributions as an author, humanitarian and the Founder of Dianetics and Scientology.

L. Ron Hubbard, Founder of Scientology and Dianetics, an accomplished explorer, author, philosopher and visionary, living 20 lifetimes in the span of one.

BRUSSELS, BELGIUM, March 12, 2022 /EINPresswire.com/ — 13 March 1911 is the day L. Ron Hubbard was born. He is the source of the Scientology religion which, founded in the 20th century, has spread worldwide alongside the methodologies he developed (religious and secular), to help mankind rid itself of its most worrisome problems, as one can watch at the featured stories broadcasted by Scientology Network.

While more in-depth biographical information can be found on the dedicated site www.lronhubbard.org, here is the story of L. Ron Hubbard, a true-to-life genius and an honest-to-God modern-day Renaissance man.

He was born Lafayette Ronald Hubbard on March 13, 1911, in Tilden, Nebraska. He spent his formative years in a rough-and-tumble Helena, Montana, where he rode barely broken range broncs at the age of 3½.

As his mother was that rarity of her time – a thoroughly educated woman – he was also reading well beyond his years: philosophy, science and the pillars of Western literature – all in an effort to satisfy a rare and abiding curiosity.

As his father was a United States naval officer, he was further afforded a then-rare opportunity to travel, crisscrossing America’s diverse communities in the teens of the 20th century.

At the age of 12, he entered the Boy Scouts, first leading his troop to victory in a regional Scout Advancement Competition, then representing scouting to United States President Calvin Coolidge.

But it was his 21 merit badges that most distinguished L. Ron Hubbard at this juncture of his life. For just days beyond his 13th birthday, he became the youngest Eagle Scout in American history. It was another distinction entirely, however, that set him on the first leg of his life’s course – specifically, when an American naval officer who had studied under Sigmund Freud introduced young L. Ron Hubbard to the theories of psychoanalysis. Although left with many unanswered questions, here was the moment when his enduring interest in unravelling the mysteries of the human mind was born.

His father’s naval career provided the next avenue of inquiry. In particular: a far-East assignment allowing the 16-year-old L. Ron Hubbard a chance to visit Asia. It was land still steeped in mystery and rarely seen by Westerners. Yet pursuing very fundamental questions on the origins of Man and the ultimate source of life, he trekked more than a quarter of a million miles through India, China, Japan and the Philippines – into many remote cultures and much arcane wisdom, including Vedic hymns at the root of Mankind’s oldest beliefs. It was also through these travels he gained entrance to forbidden Buddhist lamaseries in China’s western hills, and there witnessed wonders beyond any known scientific explanation.

Shortly after his return to the United States in 1929, he entered George Washington University as an engineering student. It was a rigorous curriculum of scientific methodology, the very tools he needed to examine human thinking with unerring accuracy. Here, too, was one of America’s earliest classes on nuclear physics, through which he embarked on yet another investigatory trail – this one to isolate a postulated life source, theoretically detectable in small energy particles. Yet laboratory experimentation was by no means all that occupied his university days.

Beginning in June of 1932, he organized the first of several expeditions to remote and primitive lands – initially, a 5,000-mile voyage into the Caribbean, where he mingled with a people pre-dating Columbus by at least 10 centuries.

Next came Puerto Rico, where he not only conducted one of the island’s first complete mineralogical surveys but also studied yet another ancient culture deep within the hinterland. Then taking his thirst for adventure to the skies, he became America’s 385th licensed glider pilot, heralded by newspapers of the day as “Flash Hubbard” for his aerial antics. While as a barnstorming sensation of powered flight across rural America, he mixed with still another slice of society.

Then, leaving university in the depths of the Great Depression, he began his career as a professional author – turning true-to-life exploits into high-action tales for magazines of the day. Tales of adventure, tales of intrigue, science fiction, fantasies, westerns and even the occasional romance. As an undisputed legend of American pulp fiction, L. Ron Hubbard wrote it all. Indeed, with more than 300 novels and novelettes to his credit, so prodigious was his output, he was eventually authoring stories under 15 pennames, and so filling whole magazines with his work.

He was also scripting matinee blockbusters for Hollywood, and otherwise leaving an indelible stamp as an author whose career would span 50 years.

Then, just as exploits fueled story ideas, so his stories funded still more exploration, until he was regularly crisscrossing the country to live extreme adventures and mix with people as far afield as Native American tribes along the Alaskan panhandle.

In recognition of discoveries in the field, he was further honored with a place in the prestigious and invitation-only Explorers Club, and so went on to captain expeditions beneath 3 club flags. But the real point of such adventures was the fact he was mixing with life to fathom life.

The first decisive breakthrough came in 1937 when he isolated the single common denominator between all living things, a dynamic principle of existence. It was recorded in a manuscript entitled Excalibur and presented the basis for all future research into the mind and source of life. But then came an interruption to that research – the Second World War. As he had since earned a rare Master Mariner’s license to captain any vessel in any ocean, he received numerous recommendations for commission as a naval officer. In particular, he was described as “discreet, loyal, honest” “and without a peer in the art of getting things done.” So it was, Lieutenant L. Ron Hubbard commanded warships in both the Atlantic and Pacific. He was highly decorated for duties under fire and ended his service in a military hospital, where he was treated for wounds suffered in combat. But that’s also where he embarked on his final road of discovery.

Working with injured servicemen who had failed to recover despite intensive medical care, he began employing all he had learned through the previous decades – spiritual principles from the East as well as scientific methodologies from the West. What he then discovered were mental factors inhibiting recovery and preventing medicines from taking effect. And when, in fact, those “mental blocks” were addressed, the medicine began to work and patients swiftly returned to health. He then continued refining procedures on people from all walks of life: actors and writers in Hollywood’s film community, street-gang members whom he treated as a Special Officer with the LAPD, even deeply troubled patients at a Georgia institution.

And so it was, having developed a workable technology of the mind, he authored a definitive text on the subject – a work detailing all underlying theory, discoveries and techniques. That book was Dianetics: The Modern Science of Mental Health, published on May 9th 1950. It sparked a storm of popular enthusiasm and immediately hit the New York Times bestseller list for 26 consecutive weeks. As such, it was the biggest-selling book on the mind ever written and remains so today. Contained within was the discovery of the reactive mind – the hidden source of nightmares, unreasonable fears, upsets and insecurity.

Yet L. Ron Hubbard never considered Dianetics an end to his research, but rather a steppingstone to the discovery and isolation of that long-elusive life source. And indeed, the techniques of Dianetics provided the means by which practitioners soon began discovering past lives. Pressing application and research even further, came the accomplishment of what is known as exteriorization – demonstrating the spirit was indeed separable from the body and mind.

While to present those discoveries, he literally circumnavigated the globe, and so Churches of Scientology opened on 4 continents, headquartered at his long-term residence in southern England. Through ensuing years, L. Ron Hubbard continued advancing the subject until his passing in 1986. His legacy comprises tens of millions of published words and 3,000 recorded lectures. While with over 250 million copies of his books and lectures in circulation, he has inspired a movement spanning all continents and all cultures.

So to those who would ask, “What kind of man could have founded the only major religion of the 20th century?” the answer is simple enough:

A man who lived life from the top-down and the bottom up.

A man who had seen much wisdom and great suffering.

A man who spent a quarter of a century bridging the gap between East and West, science and religion.

A man such as L. Ron Hubbard.