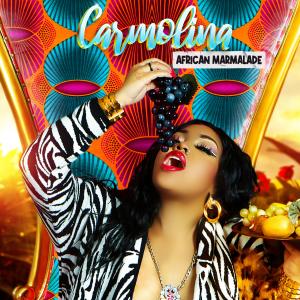 LONDON, UNITED KINGDOM, May 23, 2022 /EINPresswire.com/ — Carmolina is a famous Afrobeats artist who has just announced the launch of her new single ‘African Marmalade,’ which has been recorded in Nigeria. She has lived and traveled the African continent for years and has experienced the diversity in culture and the wonderful terrain and landscapes as well. She found the local food to be amazing, which is why she decided to dedicate a song to the beautiful continent.

After meeting renowned Afrobeats artist “Davido”, an African Icon, followed by the son of Fela Kuti “Femi Kuti”, “Yemi Alade,” and “Seyi Shay” at an industry meeting in France, “Carmolina” fell in love with Afrobeats music. She then met the CEO of Spotlight Management, who took over as a manager, and soon she was off to Nigeria to record her Afrobeats music. Having started her music career in Germany, where she grew up, she is also known to speak nine different languages.

She also performed at the Fifa World Cup in South Africa. Her music video ‘Loca’ is what put her on the global map as the song created a sensation and was played everywhere. Carmolina happens to be the first American/Caribbean Afro indigenous artist to record an Afrobeats album in Nigeria. She also did a collaboration with Sizzla, who is a renowned Jamaican artist.

Her love affair with music started at a very young age. She was at the tender age of four when she started playing classical piano music. She is all set to release her new music video by July 2022 and will be titled ‘Wasn’t Me.’ Her new song ‘Freak Retreat’ is all set to be released shortly, and it is already being compared to Cardi B and Doja Cat as well.

One of the key spokesmen for her was quoted as saying, “We are extremely pleased with the type of response her songs have been getting. Of course, she has some big plans and hopes to become the next big foreign Afrobeats artist as she craves worldwide recognition.”

Most of her singles have done really well, and she is thereby putting in her best efforts to release new singles that she believes will be loved by her fans.

About Carmolina
Carmolina has her roots in Africa, and she fell in love with music and singing at a very young age. She wants to establish herself in the world of music and her music video Loca made her a household name.