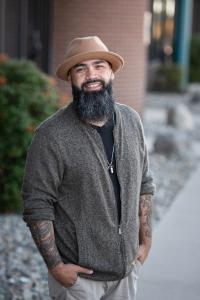 Edwin Desamour joins The Exodus Road’s board of directors

The Exodus Road, an anti-trafficking nonprofit devoted to training, liberation and aftercare, announced today that Edwin Desamour joined the board of directors.

We are so excited about the perspective, experience, wisdom and passion Edwin will bring to this fight against modern day slavery.”
— Laura Parker, the CEO and co-founder of The Exodus Road

COLORADO SPRINGS, COLORADO, U.S. , November 22, 2021 /EINPresswire.com/ — After years of working to protect, mentor and empower the youth of north Philadelphia, Edwin Desamour is adding another mission to his list: fighting human trafficking. The Exodus Road, a nonprofit that actively combats trafficking around the world, announced today that Desamour has been inducted to the board of directors.

Born and raised in north Philadelphia, Desamour grew up facing the challenges that so many young people experience living in the city as drugs, gangs and violence plague many communities. After experiencing the worst of the streets at just 16 years old and overcoming the odds, Desamour chose not to return to his old way of life, but instead, he returned to his community to be a force of positive change in it.

Since then, Desamour has served in several roles within his community to support and empower youth to overcome the lifestyles that are often pushed on them. He currently serves as the Director of the Lighthouse Sports Complex in the heart of north Philadelphia where he leads programs like boxing, basketball, and other after-school activities to encourage health and connection within the community.

He’s also worked with several organizations and foundations that work to eradicate violence, including the Philadelphia Anti-Drug Anti-Violence Network (PAAN), Latino Juvenile Justice Network and the Make the World Better Foundation (MTWB), to name a few. He also founded and directed MIMIC: Men in Motion in the Community.

And now, he adds The Exodus Road to that list.

“When I was presented with the horrors of human trafficking, I had to do something,” Desamour said. “Many of the individuals sold into sex trafficking are minors, children the same age as the students I work with and the kids I mentor … there’s no way I could stay out of this fight.”

Desamour connected with The Exodus Road through a film project that humanitarian photographer Nate Griffin, a current board member, produced. Desamour immediately became a personal financial donor and has been a champion of the work ever since.

“Edwin’s commitment to ending violence and helping young people in Philadelphia take back their futures is inspiring. He’s not afraid to go to the hard places for the good of the vulnerable, and that’s really the heart of this work,” Laura Parker, the CEO and co-founder of The Exodus Road, said. “We are so excited about the perspective, experience, wisdom and passion Edwin will bring to this fight against modern day slavery.”

Disrupting the darkness of modern-day slavery, The Exodus Road is a global nonprofit that partners with law enforcement to fight human trafficking crime, equips communities to protect the vulnerable and empowers survivors as they walk into freedom. The Colorado-based nonprofit recently launched TraffickWatch Academy: U.S., a free, online, multimedia training module that unpacks the complexities of human trafficking and educates viewers with methods for identifying signs of trafficking and how to intervene.

About The Exodus Road
The Exodus Road is a global nonprofit strategically and holistically working to end human trafficking. Working side-by-side with local staff, NGO partners and law enforcement around the world, The Exodus Road fights to liberate trafficked individuals, arrest traffickers and provide restorative care for survivors. Since its founding in 2012, the organization has assisted police in the rescue of more than 1500 survivors and the arrests of more than 851 offenders; numbers that grow almost daily. The Exodus Road’s approach to freedom incorporates prevention and training efforts (TraffickWatch Academy), intervention (Search + Rescue) and aftercare (Beyond Rescue). The Exodus Road combats human trafficking in the U.S., Thailand, Brazil, the Philippines, India and Latin America.

For additional information or to make a donation to help stop trafficking, please visit The Exodus Road’s website at https://theexodusroad.com/.