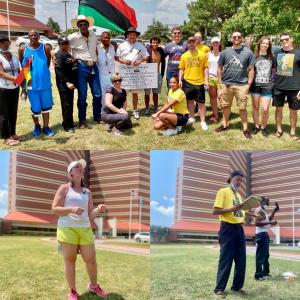 Libertarians and the Oklahoma Coalition Against People Abuse Unite

Bruno and Washington Champion the People’s Voice During Protest March

We need to address the over sentencing and overcrowding right away… Oklahoma sentences non-violent offenders for an average of 78% longer than other states.”
— Natalie Bruno

OKLAHOMA CITY, OKLAHOMA, UNITED STATES, August 5, 2021 /EINPresswire.com/ — The Oklahoma Coalition Against People Abuse (OCAPA) and the Oklahoma Libertarian Party (OKLP) partnered up last Saturday to protest inhumane conditions and overcrowding at the Oklahoma County Detention Center. The crowd gathered at 1:00 pm and marched the streets surrounding the jail, symbolizing the Israelites march around Jericho in the Old Testament. Once they finished the march, they met in front of the jail to speak and hear first-hand accounts of experiences in the county jail.

“We need to address the over sentencing and overcrowding right away,” said Bruno. “Oklahoma sentences non-violent offenders for an average of 78% longer than other states.”

Bruno, a declared Libertarian gubernatorial candidate in Oklahoma, announced criminal justice reform is one of her top issues.

Saturday’s protest and march were organized by OCAPA’s Michael Washington, who led chants during the march and had powerful words for the crowd.

“Thank you to everyone who showed up and who showed out. It was a truly humbling feeling to have been in your presence,” said Washington.

Bruno, Washington, and other protesters emphasized that they would be back every month until conditions in the jail were improved for inmates.