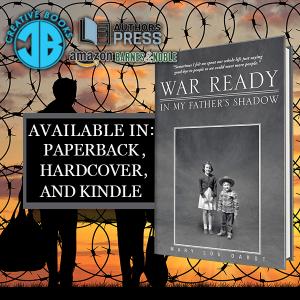 “Her memoir is seen through the eyes of the girl living it, not at decades removed, which gives it both freshness and ache.” —”
— Kirkus Indie

LONDON, UNITED KINGDOM, March 30, 2022 /EINPresswire.com/ — Life in a military household is challenging. Author Mary Lou Darst published her book title War Ready: In My Father’s Shadow. For young Mary Lou, life was an adventure. Her father served in the military. Through her 14 moves in 10 years, frequent travel, and exposure to historical places, Darst saw the world in a different way than her parents. This candid memoir recounts her family’s life in new places and cultures following World War II.

The story was discovered by reading Darst’s father’s diary. It offers intimate and candid insight into the life of a typical soldier in a time of war. His tales told from the perspective of a young soldier in southern England, Wales, and Scotland from 1943 to 1945 is a glimpse into a life many will never know firsthand.

“This was a book that truly takes you to another time and place. You were transported through the first-person narrative of the diary segments. But also through the rest of the narrative that the author shares as well. The book uses vivid imagery to create a world unlike our own but it makes you able to touch, taste, and see the experiences and events that were shared within the story itself. All-in-all it was a well-written story that is heartfelt and written in a way that will capture your interest from beginning to end!” — Amazon Customer Review.

Mary Lou Darst traveled the world with her military family. She earned a Bachelor in Literature, a Masters in Multicultural Studies, and a Bachelors in Visual and Applied Design. She taught the English language as an art and English as a second language.