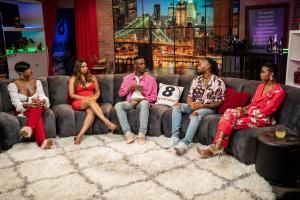 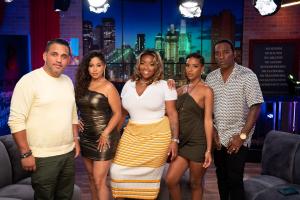 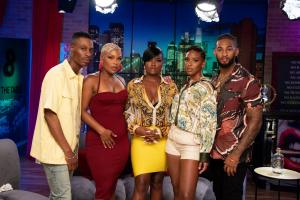 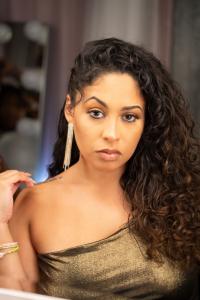 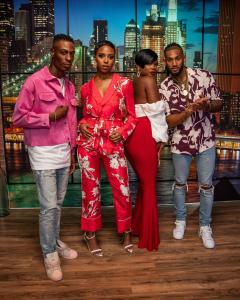 NEW YORK, NEW YORK, UNITED STATES, September 11, 2021 /EINPresswire.com/ — 8 at the Table is pleased to announce it is continuing to receive rave reviews for its season 4 show that enables viewers to experience both delight and discomfort at the same time.

8 at the Table is a YouTube TV series that showcases eight very open and honest people who get together over food and drinks to talk about taboo topics. The group’s engaging discussions lead to laughter and intense self-reflection about all things related to love, relationships, and everything in between.

What sets 8 at the Table apart from other similar platforms is the show’s eight hosts who are skillful at stirring informative and gripping conversations from all angles. Through this tactic, the show allows different perspectives on many uncomfortable topics and to hear all viewpoints from each side of the coin.
According to Sajous, his cast of hosts are what truly drive the show’s success – all displaying their own unique personalities and beliefs.

“When you put eight very different personalities together to talk about love, and relationships in conjunction with all the complexities that come with it, a wild, unpredictable and highly entertaining conversation tends to ensue,” says Alain Sajous, the series Creator and Executive Producer. “When people can have open and honest discussions about topics that make most people slightly uncomfortable, our series has fulfilled its mission by shaking up social media with weekly episodes that offer a fresh and exciting perspective.”

Amanda – The youngest cast member who brings a true GenZ/Millennial perspective to the table. She is a woman of many talents, a model, baker, and entrepreneur.

Rico – Mr. H.E.R.E himself, who has openly said that chivalry is on its last leg and has made it to E News and other viral platforms for his beliefs. He is a New Jersey born ladies’ man who feel men need to stand their ground

Erin The Renegade – Erin is the married one in the cast who believes what’s good for a man is good for a woman. Erin is an attorney and real estate investor who tells it straight up with no chase.

Holiday brings fire and ice to the table – the female rapper in the group who is unapologetically open and raw with her opinion. She is often one that isn’t afraid to go back and forth with other cast members that might not agree with her perspective.

Oliver is a character who wears his heart on his sleeve. He is transparent and vulnerable with his feelings and uses that to bring open honesty to the table. Born and raised in Brooklyn, the NY native has used his own journey to self-awareness to bring a different level of understanding to the table.
Nikki is all about empowerment. She knows exactly what she wants, and she’s not afraid to say it – on camera and off. Nikki fell in love with performing when she started dancing in school as a child. Now, she has her eyes set on seeing her name in lights.

Danny Duces, a quadruple threat is never afraid to bring the comedy – or the drama – to the table.

Naisha- The modern day businesswoman who starts the controversies with her views of fairness to today’s woman. Naisha once said in her past she found it impossible to be faithful to one person but has seen her grow and change as a woman

To view 8 at the Table, please visit the show’s YouTube page at https://www.youtube.com/c/8AtTheTable/.

About 8 at the Table

8 at the Table is a popular YouTube series that discusses taboo topics in a non- judgmental and safe space. The platform’s eight hosts are enigmatic, relatable, and personable, making the show an instant hit with almost 60k subscribers.