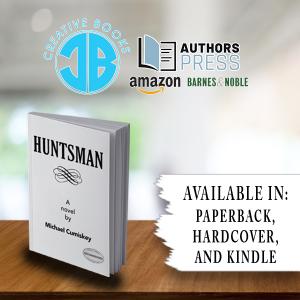 A Modern Chaser in the World of Social Issues

This is an erudite tale told exceptionally well. It is a pleasure to read and will likely be long remembered by those who do.”
— Joe Kilgore, The US Review of Books

LOS ANGELES, CALIFORNIA, UNITED STATES, April 6, 2022 /EINPresswire.com/ — Michael Cumiskey published his book, Huntsman, in April of 2020. The story is set in the present. It becomes apparent that the storyteller, Paul, is subject to many of the same insecurities and confusions prevalent in society. He attends the funeral of his estranged mother where he meets one of her ex-colleagues – an interesting older man: James. It is whilst staying in James’ cottage in the far reaches of a Yorkshire moor that Paul meets and becomes associated with the small community who live together around the cottage in an isolated location called the Mount. Supposedly there to complete his latest book, Paul is soon distracted from his task as he is intrigued by the nearby characters and their uncommon beliefs and behaviors.

“Cumiskey’s history of one man’s struggle with his conscience, his principles, his beliefs, and his behavior, along with the incidences that arise from that battle, make not only for involving intellectual stimulation but also for a whole lot of fun.” — Joe Kilgore, US Review of Books.

Michael Cumiskey was born in the north of England. His grandparents on both sides were immigrant families, one side from Ireland and the other is from Italy (Sicily).

He enjoys creative life besides his writing like the visual arts and the arena He has taught and lectured extensively throughout the UK; and exhibited his sculptures and drawings in a different set of collections in Germany, France, England, the USA, Canada, and including the national pieces of Trinidad and Tobago.

He was the first sculptor in the UK hired on staff with a new town development corporation where several of his public works have still exhibited. In 1974, he was awarded the Ronald Tree Fellowship in sculpture at the University of the West Indies. He began writing while he was in the West Indies and has completed eight novels and several large works like poetry. Some of these works have been published.