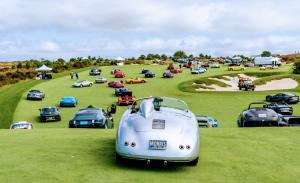 Speedster by Robert Morris at Bridgehampton

A 1955 Porsche 356 Speedster, owned and modified by the Minimalist sculptor Robert Morris is currently being auctioned off on Bring at Trailer, ending Jan 4th.

LEBANON, NEW JERSEY(NJ), UNITED STATES, January 2, 2022 /EINPresswire.com/ — A 1955 Porsche 356 Speedster, built by the Minimalist sculptor Robert Morris is currently being auctioned off on https://bringatrailer.com/listing/1955-porsche-356-speedster-9/ Robert Morris is often regarded as one of the most prominent theorists of Minimalism. https://www.wikiart.org/en/robert-morris Works by Robert Morris have been shown in the MOMA, Whitney, Guggenheim and Museum Abteiberg. “Since 1998 the record price for this artist at auction is $1,258,500 USD for Untitled, sold at Phillips New York in 2010.” (Mutual Art)

Morris had a Porsche RS-61 Porsche that he sold, and having seller’s remorse, he bought this Porsche in 1973. Morris started modifying the car in 70’s as an early “Outlaw Porsche”, influenced by the smooth lines of the RS-61. Robert built the car with the help of his assistant Rolf Horst, who helped him build his larger sculptures. Morris custom made an aluminum head fairing, passenger tonneau cover, alloy seat and alloy rear wheel spats . The body was stripped of all trim. The interior is customized with blacked out vinyl dash, special rubber mats, etc. Morris drove the Speedster until 2007, when he disassembled and repainted silver.

When the car was purchased from Morris’ wife Lucile, the panels were hanging in the Morris studio, a converted barn in NY. The panels were taken down and the Speedster was re-assembled in the studio before transport! Included with the car are the white cords used to hang the parts, along with paper and canvas templates the artist used to fabricate the covers. The car also comes complete with black canvas top, canvas tonneau cover, and side curtains.

This 1955 Speedster is eligible to do the Mille Miglia and California Mille. If new owner wanted to convert to original specs, the car comes with the original transmission, brake drums, along with a set of 16” x 3.25” steel wheels.
The auction ends on Jan 4th 2022.

Thomas
Tom Miller Sports and Classics
+ 19086935723
email us here
Visit us on social media:
Facebook
Other